Part 4 of 5: In this five-part series, we provide an introduction to tensioned fabric architecture, including the history, current applications, engineering concepts, modern materials, and the innovative benefits of tensile structures.  Click here to read additional posts.

Tensile fabric structures have become increasingly common in today’s architecture due to their design flexibility, beauty, and functional benefits.  While these modern forms of fabric architecture have seen an explosion in recent decades as a result of technologically advanced materials, tensile structures have their roots in some of the earliest forms of man-made shelters.

The Early History of Tensile Structures 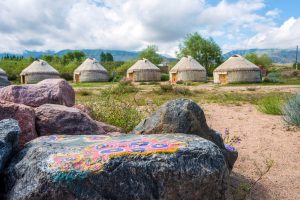 In their many forms, tents have been used for millennia by nomadic cultures.  From the traditional yurts of Central Asia to tipis used by Native American tribes, these early dwellings used animal skins or woven membranes that were stretched over a structural frame – the most basic form of tensile structures.

Among the many architectural advances made by the Roman Empire, these ancient innovators also made some of the initial contributions to the future use of tensile structures.  Roman shades, as we’ve come to know them, were used originally to block sunlight and dust inside homes, but they were adapted for large-scale use to provide shade at the Colosseum – using horizontal poles to support the outstretched fabric.

However, from the time of the Roman Empire to the 20th Century, low demand and lack of resources (cables, canvasses, and connectors) led to few additional advances. 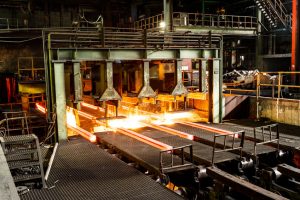 The manufacturing process developed during the Industrial Revolution and the onset of the assembly line gave way to a surge in new technologies for building materials – most importantly, the mass production of steel.

In the late 1800s and early 1900s, Vladimir Shukhov, a Russian engineer, scientist, and architect, would take another essential step towards today’s tensile structure technology by developing practical calculations of stresses and deformations for beams, shells, and membranes.  He became a leading specialist of metallic structures, including hyperboloid structures, thin-shell structures, and tensile structures, leaving countless examples of his work throughout Russia.

The major advances to the field are often attributed to the German architect and engineer, Frei Otto, who began scientific studies in the 1950s on using tensioned steel cables and membranes to create roofing systems.  Otto founded the Center for the Development of Light Construction, followed by the Institute of Light Structures at the University of Stuttgart, and he wrote the first comprehensive book on tensile structures.  Among his notable projects are the German Pavilion for the 1967 Expo in Montreal and the Munich Olympic Stadium in 1972.

Building on the research of Frei Otto, Horst Berger also made significant contributions to the field, receiving international recognition for the incorporation of lightweight fabric structures into permanent architectural designs throughout the U.S., Europe, and the Middle East.

Today, advances in technologies, design techniques, and applications continue to drive innovation the tensile architecture industry.  Many attribute this substantial growth to evolving consumer demand, challenges associated with compliance, and the need for more energy efficient solutions.  To learn more about modern advances, read our post: The Many Driving Forces Behind Innovation in Tensile Architecture.

Are Tensioned Membrane Structures Right for Your Next Project?