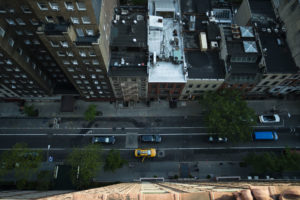 If you’ve ever walked down a city street in the summer and wondered whether it was actually hotter than nearby suburban neighborhoods, then you’re already familiar with urban heat island effect.  It’s true – cities and industrial communities are often significantly warmer than areas with more natural landscapes.

Urban heat island effect isn’t a new concept or concern for most architects, builders, and city planners – but it may soon become a widely discussed buzzword because of last week’s investigative report published by NPR.

The NPR Series: Heat and Health in American Cities

As a joint effort with the University of Maryland’s Howard Center for Investigative Journalism, NPR released a series of stories on September 3rd and 4th discussing the impact of urban heat island effect on low-income communities in the U.S.

In the breaking story, “As Rising Heat Bakes U.S. Cities, The Poor Often Feel It Most”, it was reported that low-income urban areas are more likely to be hotter than wealthier ones – and they found that to be true in dozens of major cities across the nation.  To put it another way, as summer temperatures continue to break records, the communities that are least likely to have A/C can be upwards of 10O hotter than nearby middle- and upper-class neighborhoods.

“This means that as the planet warms, the urban poor in dozens of large U.S. cities will actually experience more heat than the wealthy, simply by virtue of where they live. And not only will more people get sick from rising temperatures in the future, we found they likely already are.”

As this news finds its way into the mainstream dialog, we see it as an opportunity for us all to make meaningful strides towards implementing long-term solutions for increasing energy efficiency, reducing environmental impact, and supporting healthier communities.

The Implications for the Architectural and Construction Community

It’s frustrated many architects and builders that the U.S. has been slower to adopt passive cooling techniques than European markets.  That’s because the innovations are here – the solutions are available.  It’s just a matter of getting the necessary “buy in” from property owners, city planners, and other decision-makers who all-too-often don’t want to make the investment.

Here’s what it boils down to for us:

So, as the dialog continues (and we hope it does), it’s important that we all keep sharing our knowledge, our solutions, and our wild ideas.  After all, that’s when real innovation happens.

Want to read more on this topic?  Here are some recent posts.